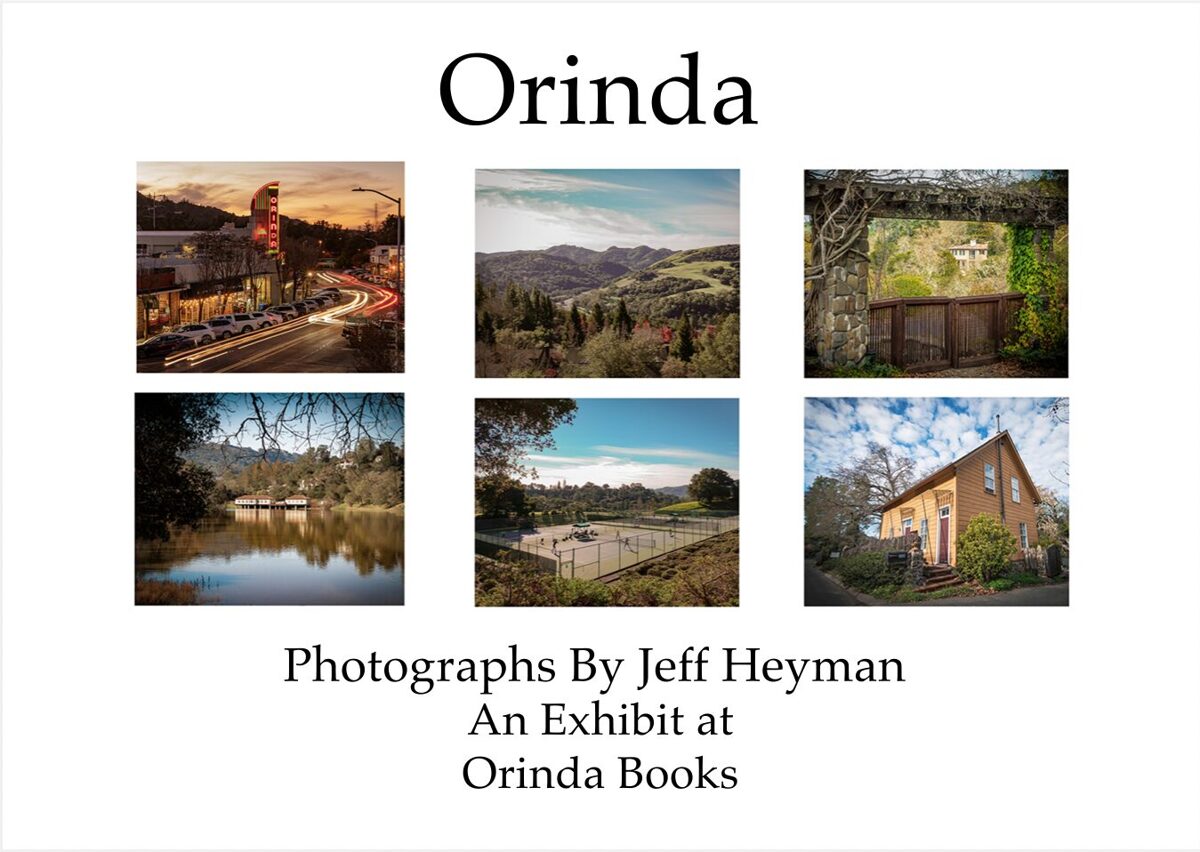 Orinda Books, an independent local bookstore in the heart of Orinda Village, is hosting a new photography exhibit, "Orinda: Photographs by Jeff Heyman," a collection of six iconic photographs of the East Bay city of Orinda. The exhibit runs through the end of February. There will be an opening reception Saturday, February 4, from 3-4:00 p.m. Orinda Books is located at 276 Village Square, Orinda, Calif. The bookstore is open Monday - Friday, 10:00 a.m. to 5:30 p.m., Saturdays, 10:00 a.m. to 5:00 p.m., and is closed on Sundays.

First taking photography classes at San Ramon Valley High School in Danville, Calif., Heyman went on to earn a degree in Fine Art Photography from San Francisco State University. He studied under the photographers Catherine Wagner, Don Worth, Jack Welpott and Melanie Walker, and painters Robert Bechtle and Paul Pratchenko. Heyman, a Bay Area native who lives in Orinda, is a freelance photographer for the Lamorinda Weekly and The Orinda News. His photographs are published regularly and his work has been featured in several photography shows. This is his second solo exhibit.

“Orinda: Photographs by Jeff Heyman" at Orinda Books features a dramatic photograph of the Orinda Theatre at sunset as well as striking landscapes of the scenic city’s hillsides. Photographs from the exhibit can be viewed online here: https://heymanfoto.smugmug.com/Exhibits/Heyman-Exhibit-Orinda-Books

Represented by Outcasts Revisited Media LLC, Jeff Heyman uses his classical training in photography to push the digital limits of the medium. With a background in photography stretching more than four decades, Jeff received his Bachelor’s Degree in Fine Art Photography from San Francisco State University and studied under painters Robert Bechtle and Paul Pratchenko. But it was his Fine Art Photography studies with Catherine Wagner, Don Worth, Jack Welpott and Melanie Walker, while at State, that truly inspired his work. Jeff went on to produce and exhibit a range of creative work, primarily in black and white.

A San Francisco native, Jeff was influenced by the various artistic and photographic trends sweeping the Bay Area. While in high school, Jeff studied photography under Ralph Rappaport, an associate of Ansel Adams. Rappaport, a major influence, taught Jeff the Zone System and advanced film development and darkroom printing techniques. Rappaport also introduced Jeff to Ruth Bernhard, who met him privately in her home for a critique of his work. This meeting, with one of the world’s definitive photographers, influenced Jeff's future work greatly. His background in classical photography is instrumental in his current work — a hybrid of classic “wet” photography and new digital formats.

You can see Jeff's work in the Heyman Foto Gallery right here: https://heymanfoto.smugmug.com